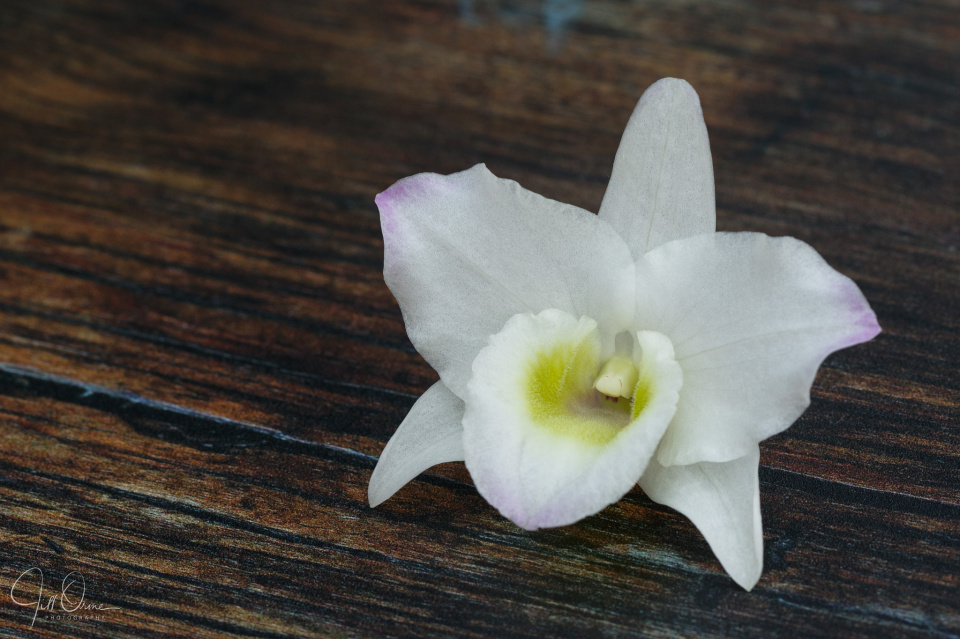 I’ve tried several times now to get a pleasing photo of my dendrobium orchid, but I find it quite tricky. I posted this one the day I bought it, but didn’t like it much because the plant (and thus the image) was very crowded. I’ve now stopped tying in its stems to the supporting canes it arrived with, and allowing it to sprawl a little has made it less congested, but it’s also increased the number of planes I have to worry about in setting up a shot, which hasn’t made things any easier. Pushed for time today, I settled for depriving it of a single bloom and photographing that by itself.

I see that the current price of white dendrobiums falls in the £20-30 bracket, which seems pretty steep for a house plant. I certainly didn’t spend anything like that on mine when I bought it three years ago, though if I had I’d be able to claim to have had good value from it by now. You can find long screeds on various web sites about the specific growing requirements of this plant, absolutely none of which I’ve followed, and yet my specimen is thriving, regularly producing new stems and covering them with these heavy, slightly waxy-looking flowers, which last for weeks on end. Given my track record with house plants this speaks very well of the dendrobium, and if you can find one at a reasonable price – or better yet get someone else to buy you one – I recommend it.

The highlight of R’s and my day was a Zoom call with the family – now rather dramatically expanded from five people to seven. Six of those spent most of their time peering at the seventh, who was curled up asleep on his father’s lap with his back turned to the camera, entirely oblivious to the fact that he was the centre of attention. Just adorable….