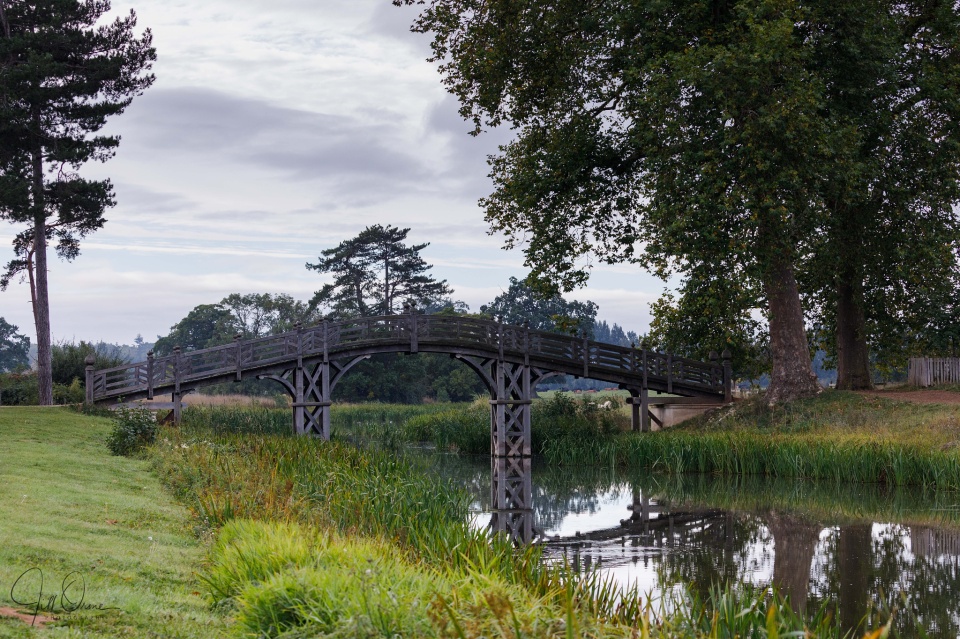 R and I went for an early walk around Croome this morning. Both of us were tired from the exertions of the week (though he’d been doing actual proper work, so had more right to grumpy fatigue than I did), but Croome worked its usual magic, and we came away feeling much better about life.

I had – of course – hoped for dragons, but it was a damp and chilly morning, and the dragons had more sense than to be trying to fly in those conditions. We even looked quite carefully in all the reed beds around the lake for damp, roosting dragons, but didn’t find any of those either. So, landscape it is then; though I have put an autumn wildlife shot on Facebook, if you’d care to click through to it.

If you’re local, or you’ve followed my nonsense for a reasonable period of time, you’ll recognise this as the Chinese Bridge over the artificial river – which I’m surprised to discover is not universally loved. I think it’s marvellous, and I can rarely resist photographing it, but apparently some people think it’s horribly out of keeping with the landscape. To which I would point out the very chequered history of the estate, which has at times been a boys’ boarding school and a Hare Krishna commune, and once belonged to a property developer with absolutely execrable taste in bathrooms (I know this because one of the bathrooms remains, though it’s now disconnected from the plumbing because the bath is so large that the floor can’t safely support its filled weight). To me this odd history, and the various scars it has left behind, is part of what makes Croome special – and if the Chinese Bridge is also odd, then it fits right in.