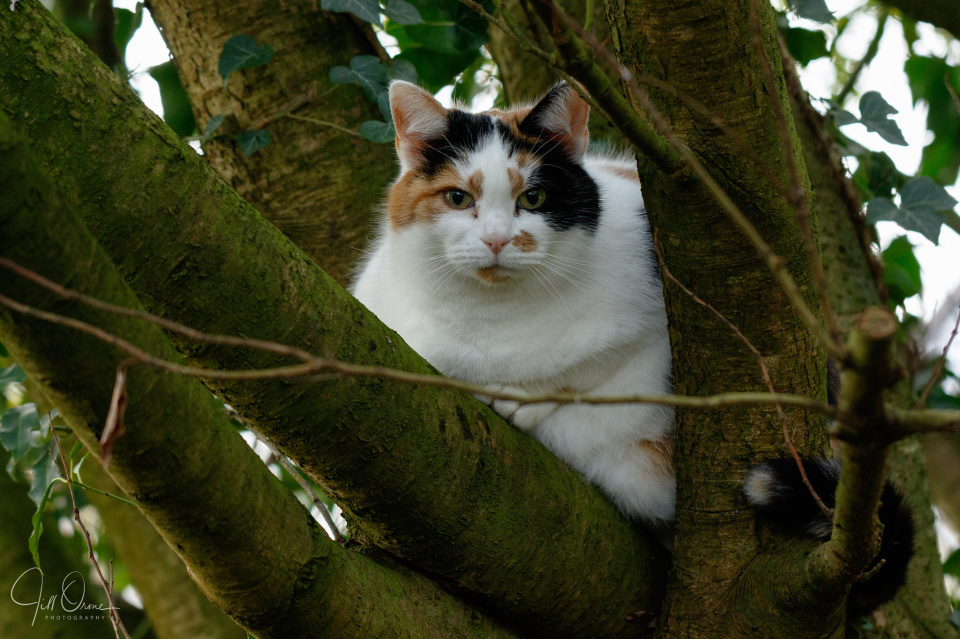 She’ll be smirking on the other side of her face if I catch her stalking my garden birds while I have one of the Offspring’s old Super Soakers to hand. The other morning while I was making my breakfast her head appeared very slowly above the level of the patio wall – like a periscope rising – as she scanned it for any unwary birds taking the ground food mix I sometimes put out there. And the reason she was sitting in this laurel tree this morning is that it’s a major roost site for finches and tits. She lives next door, in theory at least, but our neighbour keeps an extremely tidy garden, and therefore there’s more wildlife in ours.

We may have to get another dog.

Having chased the cat out of the garden, R and I finally got ourselves into gear and planted the 50 bare-root hedging whips that arrived during the freeze:

R, who did most of the digging, would probably want me to point out here that the supplier was generous in bundling them, and that in fact there were 56 whips altogether. Anyway, counting the black bamboo and the whitebeam tree we planted earlier in the week, we’ve now sited 52 out of 53 of our recent purchases (or 58 out of 59 if one was being pedantic), leaving just a red berberis to find a home for over the weekend. I want to get some alder buckthorn too, but I probably won’t mention that to R just yet.

Pfizer vaccination day +3. I’m still sleeping very badly, but most of the other after effects seem to have gone away, with the exception of a truly splitting headache. I’m extremely tired after today’s gardening, which probably hasn’t helped the headache, so I’m planning an early night tonight and hoping that it might have lifted by the morning.