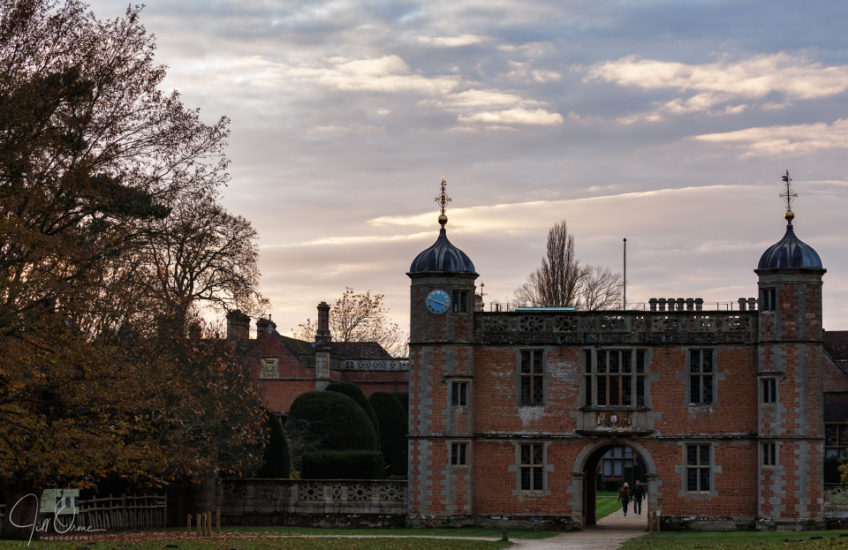 I achieved a ton of things today, but most of them are invisible to anyone other than me and my Mac so I’d struggle to prove it if interrogated. I finally made it out of the door with a camera at about 3.15pm, zooming off towards Charlecote with one anxious eye on the fading light.

Walking into the reception area at 3.45, I discovered that they were closing at 4pm today – by rights they shouldn’t have allowed me onto the estate, but because I said I knew where I was going and only wanted to grab a few photos, they waved me through. It was clear that I wasn’t going to have time to track down the fallow deer (which was annoying as that was why I was there), but I think it’s a testament to the power walking R and I have been doing lately that I made it down to the house and then out to viewpoints at both sides of the garden, rattled off a few dozen shots, and was able to walk back out under this gateway a few seconds after the clock struck four. I didn’t take anything competition-worthy, but R and I both like this photo because of the way the light is hitting the roof, and the framing of the couple in the gateway.

Memo to self: check the opening times on line in future!

The household (both of us) is currently in a slightly twittery state, because we found out yesterday that the new fridge freezer is going to be delivered tomorrow – though we won’t know exactly when until the haulier’s tracking page is updated in the morning. If we’re lucky, we’ll be able to find out the expected time of the delivery before it actually happens, which could be as early as 8am. The current fridge freezer (which we’ve paid to have removed as the new one arrives) is still plugged in and almost full of food; there is a Plan for dealing with the situation (and a Contingency Plan in case of an 8am delivery), but I’d be lying if I said I was confident that the Plan is foolproof. I’m currently resisting the temptation to go downstairs and eat something, so as to make the Plan a little easier to execute.

Before I twitter off bedward, thank you for the nice comments, stars and hearts on yesterday’s swan: I’m very pleased you found her so amusing.