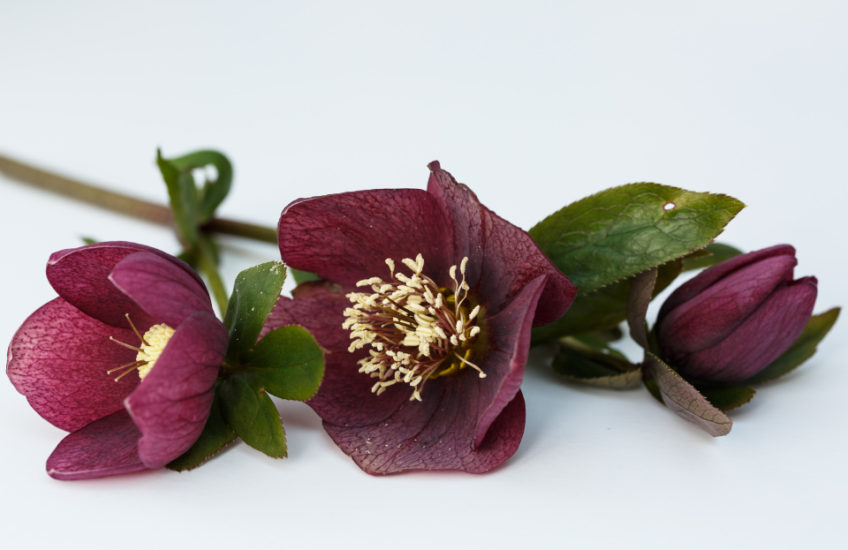 R and I spent an energetic couple of hours in the middle of the day, tidying the front garden. It’s quite a large space, so getting round it in that time was a demonstration of The Art of Rough Gardening – but it looks a great deal better than it did, and at least we can be happy that our ongoing problem has been reduced to the extent of three barrow-loads of weeds and another of brambles.

Sadly I nicked the stem of this hellebore while I was pruning a perovskia, which was especially annoying as it’s one of my favourites, but sadly doesn’t flower very prolifically. I thought that the least I could do with the poor thing was to photograph it before consigning it to the compost heap.

The nicest thing that happened today was the unusual occurrence of both Offspring being home at the same time: the Child known to the world as People Poems is on tour again, this time in company with his chum George Boomsma, and they’re in enjoying a brief hiatus between gigs in Cardiff last Wednesday and Stratford-upon-Avon tomorrow; and as her baby brother has chosen to grace his ageds with his presence for a couple of days, Child One took twenty four hours out of her own hectic schedule to come home too. So this evening we had a leisurely family meal and generally put the world to rights, which was delightful.

Thank you for all the positivity bestowed on yesterday’s pheasant. We’ve only had one around today, and I’m not sure which of them it was – my closest encounter with him was when I walked out of the back door to go and lock up the garage, and startled him into noisy flight from the top of the yard wall. I made amends by sprinkling some ground food around the lawn, and after I’d gone back into the house and closed the door he graciously consented to return and hoover it up.