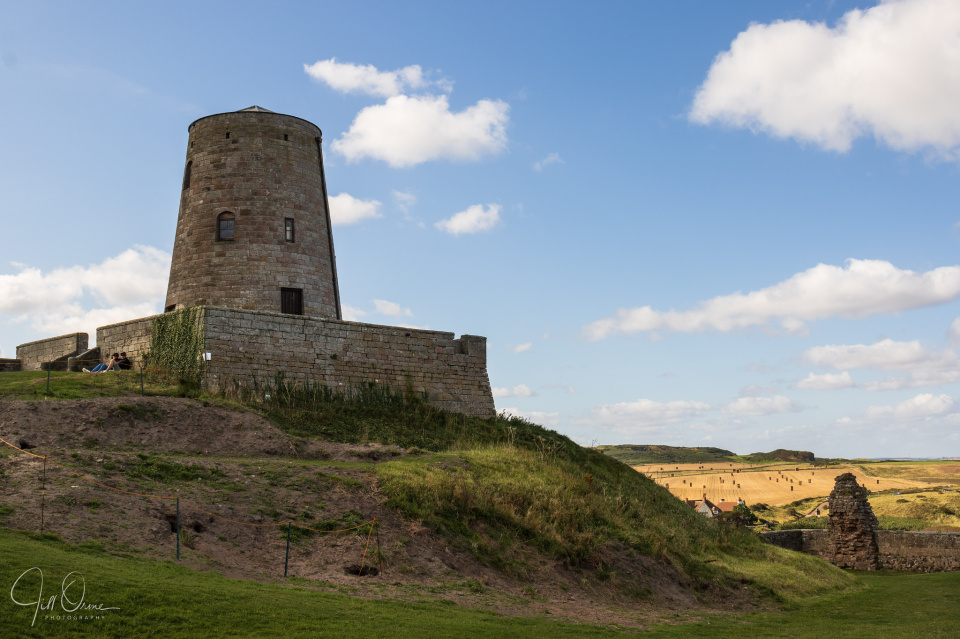 In welcome contrast to yesterday, this morning dawned gloriously sunny, and R and I went road-tripping. “That’s quite a lot of castles,” he said in response to my plan. “Are you sure you want to do all of them?” I was sure, so he worked out a route and some timings that would allow us to reach Alnwick by mid-afternoon, and off we went.

With the tide in our favour, we started at Lindisfarne, just a few miles south of the Scottish border. The journey across the causeway was quite cool, but the island itself didn’t really live up to my expectations – though we were there for such a short time that I can’t honestly claim to have given it the fairest of chances. I’ve added the best of my photos of the castle as an extra. 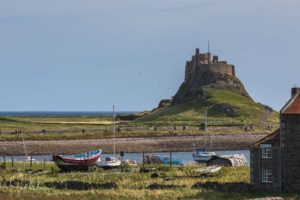 For me, the most exciting thing about Lindisfarne was the fact that R managed to find a place to pull in as we came back across the causeway, allowing me to leap out of the car with the long lens and stalk a little egret and a curlew that were feeding on the mud flats. The little egret was not impressed and removed itself almost at once, but the curlew (probably a juvenile on inward migration from northern Europe) was quite unconcerned, and allowed me a photo.

We then drove south along the Northumberland Coastal Route until we reached Bamburgh, where we spent an enjoyable couple of hours at the magnificent castle. This is the C18th windmill in the West Ward, which is currently used to store archaeological finds; I’m not sure, but I think the rather ugly orange tape is something to do with a dig that’s going on just out of the left side of the frame. In the distance to the right there’s a glimpse of the village, with a cut field beyond, but sadly my lens wasn’t wide enough to include the beautiful pale gold beach and rich blue sea as well, so I invite you to imagine those over on the right-hand side. There’s some information about the windmill here, if you’re interested.

Following the coast road down through Seahouses (gateway to the Farne Islands), we then swung round to take a look at Dunstanburgh Castle – though only from a distance, because we were nearly out of time. I had hopes for some of my long lens shots of this picturesque ruin, but I hadn’t factored in the effect of heat haze, which has made most of them look like watercolour paintings done by an unskilled artist.

If I’d had my wits about me I could have snapped a fourth castle a few minutes later as we came down into Alnwick, though asking R to stop for me to take yet more photos might just have cost me my marriage. As it was, we spent a lovely afternoon and evening with three of R’s friends, who are lucky enough to live in this glorious part of the world, and were happy – though not surprised – to find that we’ve fallen in love with their home county.

On our way out to dinner we passed castle number five, in the pretty village of Warkworth, which definitely needs to be explored on another trip. Visiting Warkworth would also get me to the Coquet Estuary – I almost dislocated my neck trying to spot birds as we drove alongside it this evening, and I am definitely spending a few hours there as soon as I reasonably can. We ate at The Old Boat House in Amble, and had a splendid evening.