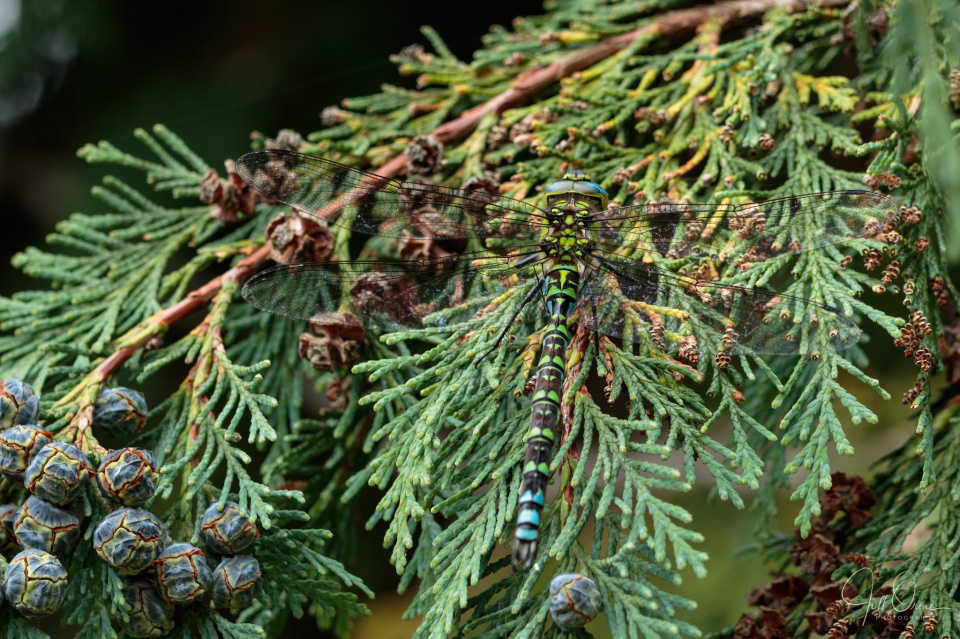 “Do be careful,” said R – unnecessarily, but reassuringly.

I was precariously balanced, one boot behind the other, on the arm of the garden bench, reaching up to point the macro at this spot about ten feet up in the conifer. ‘Unnecessarily’ is probably the wrong word in those circumstances – the warning was wholly sensible, but maybe rather pointless given the peril in which I’d already placed myself. It was reassuring though to realise that I was still apparently worth more to him alive than dead – if he’d just made a sudden loud noise instead of speaking to me, I’d probably have fallen off, and landed on my head while trying to protect the camera.

I returned myself to terra firma, and showed him the rear screen. “What?” he enquired, peering at what looked like a photo of part of a tree. It was only when I drew out the line of the dragon with my finger that he realised what had been worth mountaineering for – though to be honest he could probably have guessed. Because dragons.

I would never have spotted this male Southern Hawker if he hadn’t flown past me while I was standing in the top garden thinking about the pruning of shrubs, and landed where I could pinpoint him. For the past couple of days there has usually been a Hawker hawking around some part of the garden, but this is the first time I’ve seen one come down – and as I had the camera and the garden bench to hand it seemed too good an opportunity to miss. After capturing him from this angle I decided to try for a half profile shot, and was just moving the bench when he apparently decided that enough was enough, and took off.

After which, R and I did gardening (eeurgh). Or to be more accurate, R did pruning, while I stood around issuing instructions about what needed cutting at which point. My favourite kind of gardening: lots of talking, and no actual effort.