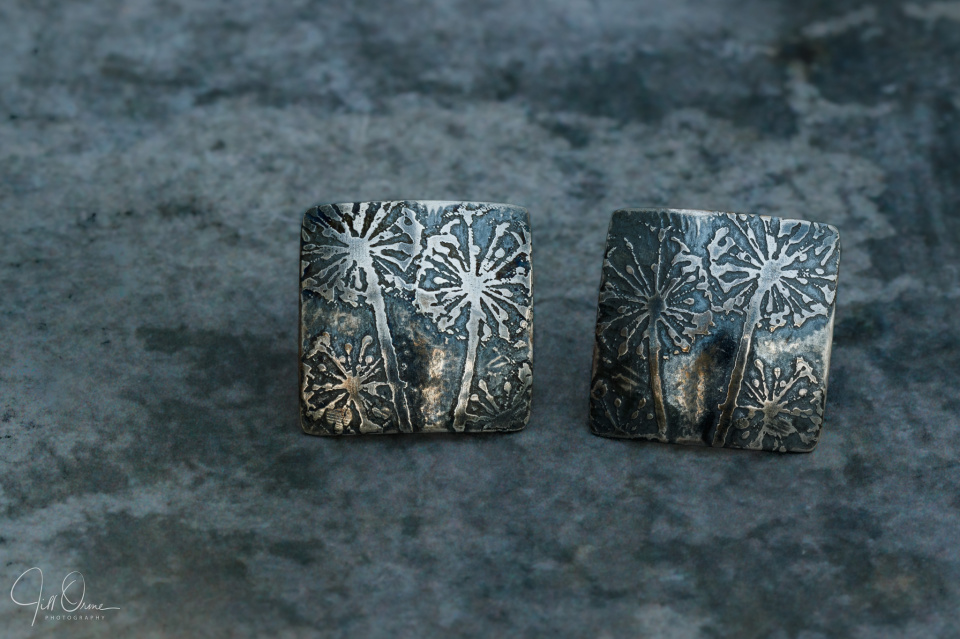 The weather did one of its rollercoaster things today, and gave us a full day of mizzly rain and almost no light. So I stayed in and tried to do useful things.

R bought these earrings about eighteen months ago from the gallery in the walled garden at Croome, with a view to future gifting. I helped to choose them, but we both knew full well that he only had to hold onto them for a while before giving them to me and I’d most probably forget all about them – which is exactly what happened. In fact, it turned out that we’d both forgotten what they were like, so we had a very nice surprise when I opened the package on Monday. They were made in oxidised silver by the local jeweller Ali Tregaskes, who uses her own photos to create the designs for her pieces, many of them based on plant forms such as these umbellifer seed heads. I love them, and now that they’ve had their moment in front of the camera I’m likely to be wearing them a lot.

This afternoon I made marmalade. We’ve run out of the lemon and lime we made a few months ago (‘run’ being the operative word, given that it didn’t set properly), and we haven’t yet reached the short Seville orange season (assuming we’re going to get any Seville oranges at all this winter, what with bloody Brexit); but my friend J, who is a chef as well as an excellent nature photographer, recommended me to some tinned fruit pulp that you can buy in the supermarket and then just boil up with sugar, while pretending that you did all the hard work of juicing, pithing and chopping yourself. I bought the only type stocked by my local Waitrose, which is Ma Made thin-cut Seville orange, but a quick web search has revealed that a brand called Home Cook (sold by Lakeland) do thick, medium, and thin-cut Seville, and also lemon. I flinched slightly at the thought of using four pounds of sugar to get six pounds of marmalade, but it seemed sensible to follow the instructions exactly, at least for the first batch. I can report that it was very easy to make, set quite readily, and the smell had R drifting into the kitchen asking to try it, when I’d barely finished ladling it into the jars. I will report on the taste in due course!