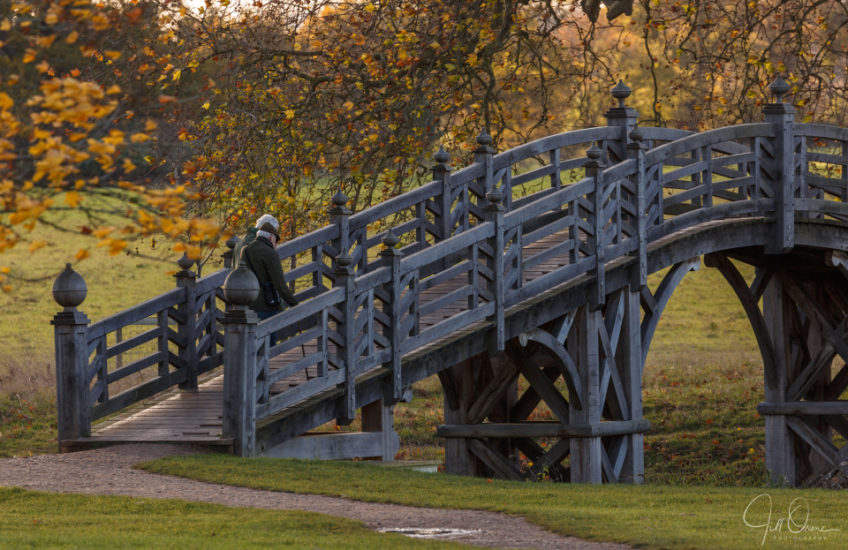 It being a bright (though bitterly cold) day, R and I went over to Croome to take our walk. Cake was not eaten, but the cheese scones proved irresistible. The estate was busy, though only the car park and café were difficult to negotiate; many families (and a lovely array of handsome dogs) were enjoying the park, and as you see here some more senior people too. I must confess to wondering as I was taking this shot if I should actually be rushing forward to offer assistance instead, because the bridge is steep and can be quite slippery, but in the event all was well.

This evening I’ve watched two hours of television, which is quite unusual for me. Blue Planet was wonderful as ever (though I have to watch through my fingers when things are being eaten by other things); and then the BBC’s new adaptation of Howard’s End (a story I’ve always quite disliked) proved to be so good that the first episode (of four) almost got me to the point of being prepared to overlook how annoying most of the characters are. If you missed either, I recommend catch-up.

Oh, there is other thing that I should probably tell you to stop you worrying: we now have a wedding venue, and a date! So I’m beginning the process of pacing myself through the next 18 months, while giving serious thought to that Land Rover. I had hoped that this week might involve several phone calls a day on the subject of caterers, but sadly the Bride-To-Be is away, being on the jury of the Manchester Animation Festival, so I’m to be deprived of that pleasure; I’m sure you’ll be able to empathise with my disappointment.