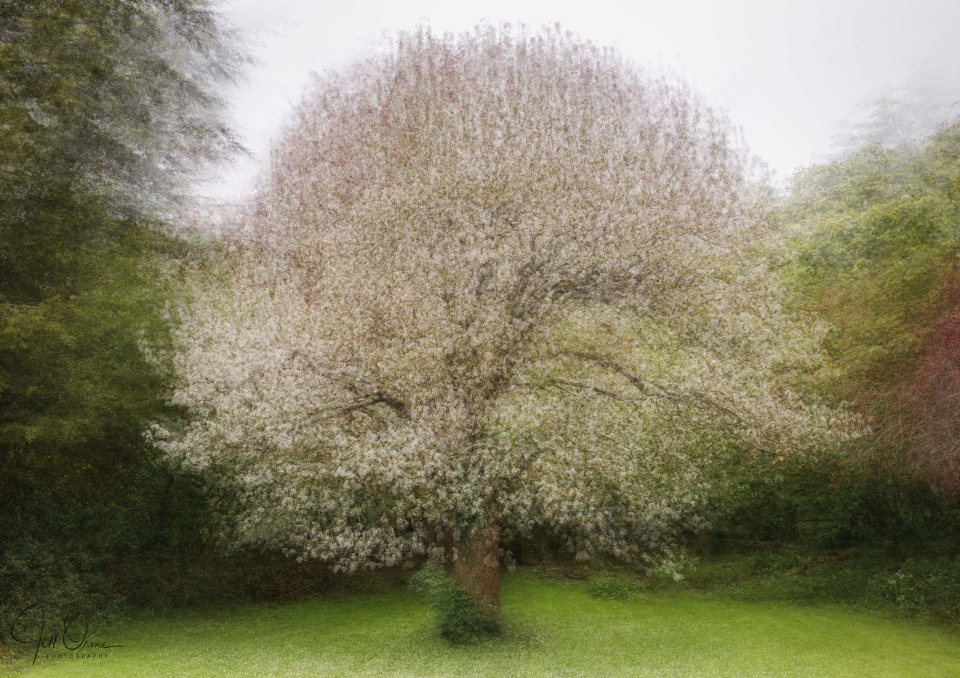 Though possibly not for long.

We’re forecast to have horrible weather over the Bank Holiday weekend, and I realised this morning that this might well mean the end for the blossom on our ancient cider apple tree, which has been luscious this year – so I decided to try to memorialise it. It wasn’t easy to shoot this huge tree in the round because there are so many other trees and shrubs around it, so I had to fudge the Pep Ventosa technique a little: I used a 24-70 lens and changed the focal distance as necessary, which isn’t ideal because widening the angle gives you some distortion, but I decided that it was better than the alternative, which would have been to take all the shots from one side. A blue sky would also have been nice, but you can’t have everything, and in some ways flat light was helpful. In the end I layered twenty frames, and used several hours of the day to achieve this, but I do quite like it; I may even have it printed up to see if it would make a competition image.

Just a small rant before I go: yesterday’s local elections produced a massive swing to the LibDems and Greens – both staunchly pro-European parties – and yet both the Conservatives (who were trounced) and the Labour Party (which ought to have been doing the trouncing, but failed) have somehow decided that this is a message from the electorate that they need to get on with delivering Brexit. The only possible explanation for this that I can see is that they’re both so utterly corrupt and complicit in this illegal and immoral process, that they’re equally desperate to get us out of Europe before the country finds a way of stopping them.

Disaster socialists to the left of me, disaster capitalists to the right, and here I am, stuck in the middle with EU.

I’m absolutely raging. I’ve written letters, and signed petitions, and marched, and voted….. and I still feel utterly ignored. I really don’t know what you have to do in this country to get a politician to listen to you. As usual, I wholeheartedly agree with Ian Dunt.