I heard yesterday that the White Admirals were out, and as this is a butterfly of which I’d only previously managed record shots, I was keen to find one as soon as possible: they have a fairly long flight season, but their fondness for bramble nectar tends to lead to their wings becoming ragged very quickly. Grafton Wood is a good place for White Admirals, but is quite an irritating reserve to access, being surrounded by farm land; it’s also hilly, and hot to walk on a day like today. A few minutes of research gave me a couple of other potential sites within a reasonable radius of home, and as I’d never been there before I plumped for a visit to Trench Wood, near Droitwich.

Among all the other things I’ve been upset about recently (BABIES?? Kept in CAGES????), I’ve been quite worried about the obvious decline in invertebrate numbers, and I made the mistake yesterday evening of reading this depressing article from last Sunday’s Observer, which deepened my gloom. So it was a huge relief, on parking the car at Trench Wood, to find myself immediately surrounded by flying insects (and an even greater one to discover that the miasma of citronella with which I’d doused myself was at least reasonably effective in deterring them from biting chunks out of me). Within a few yards I’d got used to the Doppler effect of bees and flies zooming past my head, and stopped flinching every time it happened, and I was able to get down to some serious butterfly hunting.

It only took me a few minutes to find this lovely individual, the first of several White Admirals I photographed over the next couple of hours; I have photos that are artier, and that in some ways I prefer, but I’m posting this one because it shows the underwing patterning quite nicely. I’m not sure if this a male or a female; the sexes look very similar, although it’s said that the female’s wings are rounder, and females are also slightly larger than males – but I think I’d need to see a pair together to have any chance of distinguishing them, and all the ones I saw today were on their own. They were also quite passive, which is good for photography, of course, but did deprive me of the chance of watching their remarkable gliding flight.

For much of the time I was in the wood, I was distracted every few minutes by the flight of an even larger butterfly: fresh male Silver-washed Fritillaries were dashing up and down the rides in search of females. Our largest fritillary – the male’s wing span is around three inches – these are quite spectacular butterflies,with their deep orange and black markings, and fast and powerful flight. When the males are hunting there’s little chance of catching a photo; all you can do is hope to be in the right place at the right time when they feel the sudden need for a tea break, and eventually I had the good luck to see one drop onto bramble and feed briefly, before rushing off again in search of a mate. In my extra photo you can see that he’s a male by the four heavy bars on his forewing, which form the sex brand that produces his pheromones; during courtship – which I’ve never been fortunate enough to witness – the male showers the female with scent scales from this brand, and then draws her antennae over it, a move that she apparently finds swoon-inducingly irresistible. 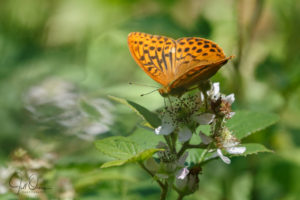 As well as White Admirals and Silver-washed Fritillaries, my third exciting find at Trench Wood was that it has Beautiful Demoiselles – not a species I expect to trip over in Deepest Worcestershire. I also found Speckled Woods, Meadow Browns, Large Whites, Ringlets, Common Blues, Small Tortoiseshells and Large Skippers, as well as bees, hoverflies and some really handsome beetles (and many, many flies); and my bug hunting was performed to the soundtrack of mixed bird song and the mewing of buzzards. All this, and the reserve is (relatively) flat, is reached by proper roads, and has sensible off-road parking. I honestly don’t know why I’ve never been there before, but I do know that I’ll be going again.