From one fearsome predator to another – though on a rather reduced scale.

I had an interesting bug walk around the parish this afternoon, bagging shots of some nice bee-mimicking hoverflies, and what looks like a wasp-mimicking bee, though I’m still waiting for a BWARS person to tell me exactly what it is. There were two Large Skippers in the butterfly field, though they had that air of mingled fear and confusion that seems quite common in newly-emerged insects, and I only managed a distant record shot before they fled into the depths of a bramble thicket – causing me to wince for the wings they probably haven’t quite got used to owning yet. Similarly in Tilly’s field, there were two newly emerged Meadow Browns which rushed to the other side of the field when I tried to get close enough for a decent photo – though they were positively calm compared with the two Cinnabars that fled into the neighbouring orchard as soon as they set eyes on me, so that I didn’t even manage a record shot of either of them.

Despite all this skittishness, I knew that I did have some postable photos; so when R and I went to Stratford for an early evening meal, I only took the camera because I knew that if I didn’t, something would stray across my path that needed to be photographed, and I’d then have to spend the rest of the evening grumping about having missed it. But thus it was then when we were strolling back to the car along the river, and R spotted a selection of pretty damselflies in the inevitable nettle patch, I was able to whisk the macro out of my handbag and rattle off some shots of them. 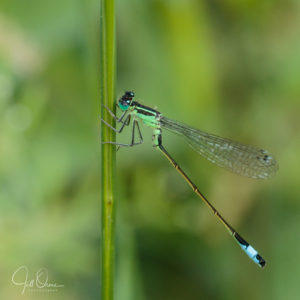 Despite their very different colouring, both the lovelies here are juvenile female Blue-tailed Damselflies. The one in the extra is maturing towards the typica form, which has largely blue markings, and I think the girl in the main image may be as well – but for her there’s another potential final colourway. At the moment, for obvious reasons, she’s the form known as violacea, and these individuals mature either to a typica, or to a form called infuscans, which has thoracic markings that are somewhere between olive and mustard, and a brown tail. The reason I think that she will end up as a typica is that her eye spots have already turned from violet to blue, and the infuscans form has mustard coloured eye spots – but I certainly wouldn’t want to be cited as any kind of authority. There’s yet another form of these immature female Blue-tails, called rufescens, which starts with a dramatically pink thorax and a blue tail, and winds up a kind of generalised muddy brown (the mature rufescens is compensated for receiving the worst colouring by being given the longest name, rufescens-obsoleta) – so the ability of these damsels to change colour, even from blue to something quite definitely not blue, makes them tricky for the rank amateur to classify.

I do think they’re rather charming though, in their pastel outfits, and I’m especially pleased to have seen the violacea female. When I realised what R had found, I did scan the nettles to see if I could find a rufescens to complete the set, but I wasn’t particularly disappointed not to find one: vivid pink and blue would have looked rather garish against these two, I think – like the one bridesmaid who didn’t follow the prescribed dress code, and has to pushed to the back of all the group photos.