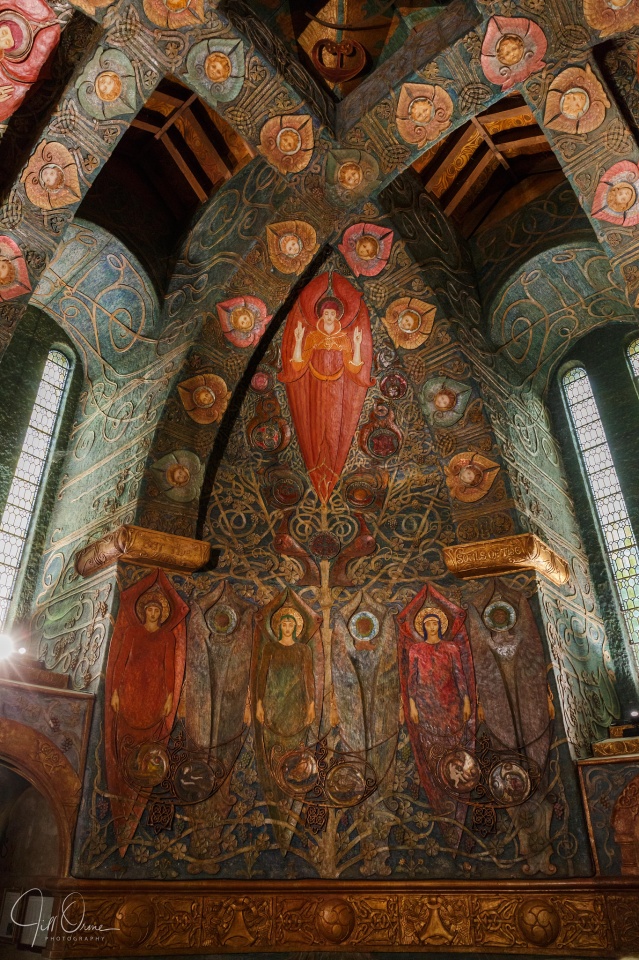 One of the few up sides of having Facebook know everything about you from your inside leg measurement through your detailed family tree to your bank account PIN code, is that occasionally they suggest an event to you that does actually chime with your interests. Which is how R came to hear that there is currently an exhibition of Pre-Raphaelite paintings at the Watts Gallery in Compton, Surrey – and that’s where we went today.

The Watts Gallery was built to house a permanent collection of the works of the Victorian artist George Frederic Watts, which is still its primary purpose, but there’s a small gallery off the main building which displays work by Evelyn and William de Morgan, and they also stage temporary exhibitions such as A Pre-Raphaelite Collection Unveiled. Apparently, until fairly recently the gallery was in a parlous state, with leaking roofs and terrible lighting, but over the last few years the combination of a National Lottery grant and the proceeds from the sale of two paintings have allowed the building to be restored and refurbished, and it’s now a lovely space. The paintings are nicely hung and beautifully lit, and downstairs there is a really interesting studio showing some of the sculpture that Watts turned to late in his life – including the plaster model for a gigantic equestrian statue called Physical Energy, of which a new cast was recently made to mark Watts’ bicentenary, and the model for the statue of Alfred, Lord Tennyson that stands in Lincoln Cathedral.

The Pre-Raphaelite exhibition was fun, but my favourite things in the gallery were all part of the permanent collection. I especially liked a room they call Cosmos, which contains a selection of Watts’ symbolist works – and of all the varied things in that room, the one that had me almost transfixed is a painting called Hope. Apparently it’s very famous – not least for the fact that a sermon preached around it in Chicago in 1990 inspired the young Barack Obama and influenced his decision to go into politics – but I’d never seen it before, and I could hardly tear myself away from it. The version that’s in the Watts Gallery is on loan from a private collection, so I couldn’t photograph it, but there’s a copy in Tate Britain – I don’t think it’s quite as good, but if you’re interested, it’s reproduced here.

About half a mile away from the Gallery is the Watts Chapel, which was designed for the Parish Council by Watts’ second wife, the artist and suffragist Mary Fraser Tytler, and built and decorated under her supervision by the villagers of Compton. It’s an extraordinary little building – I suspect that you would either love or loathe it, and I’m happy to say that I’m in the love camp – and though I did the best I could with the camera, if you’re into decorative arts, and able to get to Surrey, I strongly recommend that you go and take a look at it for yourself. The cemetery surrounding the chapel is rather attractive too, with a cloister and some Arts & Craftsy memorials, and the whole place has a nice feel to it. The Chapel is still in use (a funeral cortège was leaving as we arrived in the village), but is open to the public the rest of the time.

The Watts Gallery can be found here, and the Watts Chapel here. There’s a Wiki on the Chapel here, plus some more about Mary Fraser Tytler and George Frederic Watts. And if you haven’t already had enough of the Celtic Revival and/or the sound of me droning on in your head, I’ve put some other photos here.