There are some days that you can reasonably hope to remember for the rest of your life – and today was most definitely one of those. Getting to Skomer is a hit-and-miss business, and there were times when I was pretty sure that we weren’t going to make it, at least on this trip to Pembrokeshire, but all of the stress disappeared when we arrived on the island, and we had absolutely the best time. If birds are your thing, I can’t recommend it too highly: the very fact that access is limited makes it a haven for a wide range of birds, and though I haven’t yet processed more than a few files, I know that I have good shots of gulls, oystercatchers, guillemots, razorbills, choughs, and a few inland birds (not to mention all the things I didn’t manage to capture, including a couple of the resident short-eared owls!). But of course, it’s the puffins that are the icons of Skomer, and I’ve pulled out two photos that speak to both R and me, to represent the day.

On arriving on the island, most people seem to make straight for the area called The Wick, to the west of the landing point, because that’s the section that’s most famous for its puffin burrows – so to avoid adding to the crowd, R and I walked northwards to the far side of the island (where we saw a seal sunbathing at the foot of the rock called the Garland Stone), before turning south-westward towards Skomer Head. To our surprise we almost tripped over a group of puffins here, of which the one in my main image was the most assertive; over the course of a couple of minutes he hopped from rock to rock, getting closer to us each time, and finally came down onto the grass and marched up to us, growling. Given that these birds are only about ten inches tall, this was very sweet and really quite funny, but as we were clearly not welcome we left him in peace and went on our way.

The extra was taken from the path that runs between Skomer Head and The Wick, where there were literally hundreds of puffins going about their business and largely ignoring the visitors. Some were just standing around, alone or in groups, or going in and out of burrows; others were throwing themselves off the cliff (heart-stopping until you remember that they can fly), or zooming in and landing (usually) untidily; some were bonding by tapping their bills together, and others were squabbling; and a few, like this one, were resting out in the open and just watching all the craziness going on around them. The very first thing they tell you when you set foot on Skomer is “Always stick to the paths!” – because much of the land has been burrowed by puffins and Manx shearwaters, and they don’t want you caving in a burrow and either breaking your ankle or squashing a bird in its home – but you also have to watch your step on the path in this area, because there are puffin burrows on both sides and they quite frequently cross from one to the other. 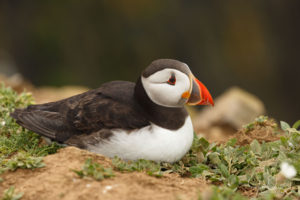 There’s so much more I could tell you, but to ease your pain it should probably be over a large glass of wine, or at the very least least a cup of tea and a plate of chocolate Hobnobs. As I can’t lull you with alcohol or chocolate I’ll just point you at some puffin fun facts, and leave you with a few pieces of advice if you’re thinking of making a Skomer trip yourself (as I know at least a couple of people are):

If you can, choose a day with a decent weather forecast – it seems that the boat won’t sail if there’s a north wind, and other than a small visitor centre and a couple of even smaller bird hides, there’s no shelter on the island (unless you’ve booked accommodation – which brings its own special set of challenges).

Skomer Boat Info. tweets each morning as to whether the boats will run that day or not – though by the time the post goes up you’ll already need to be in the queue for landing passes. But it’s worth checking the feed for a few days before your planned trip, and comparing it against the weather forecast for those days – it may help you to predict whether your chosen day is likely to be a sailing day or not.

You’ll need to be in the queue for landing passes early: R and I arrived shortly before 7am, and the queue was already long enough to add to my anxiety. The Welsh Wildife Tust only permits 250 visitors a day to go onto the island – currently transported in groups of 50 on boats leaving Martin’s Haven at half-hour intervals between 10am and noon – and we were on the fourth of the five boats.

You can buy water (and I think maybe snacks) at the landing point on Skomer, but there is no café on the island. On the other hand, there are only a couple of composting toilets for the whole place, so it’s probably a good thing that they don’t serve banquets! We chose to get by on water and flapjacks, and had a hefty meal in the evening.

You may need a hefty meal in the evening. Obviously it’s not compulsory to walk the entire island, but as it’s been a faff getting there, and your boat back is five hours after the one on which you went out, you might just as well. We walked over 20,000 steps, and R’s Fitbit gave him a special badge for having climbed 108 floors (a floor meaning that you’ve gone either up or down ten feet). By the time we disembarked at Martin’s Haven and had to walk up yet another hill to get back to the car, I wanted to throw myself down in the road, drum my heels and yell “NO!!! I WON’T!!!!”

In case there’s no boat, or you can’t get on one, the same company that runs the ferry also does non-landing boat trips around Skomer and Skokholm, and though it wouldn’t be as good, you would get a reasonable view of some of the birds in the water and on the cliffs. Plus, the piece of land beyond the embarkation area at Martin’s Haven is owned by the National Trust, and also has a good range of bird and insect life – R and I used some of the time between buying our landing passes and getting on the boat to explore this area, and I got some nice photos here too.

There are probably other useful things that I’ve forgotten, and if R reminds me of any I’ll add them as a postscript later. And when I finish processing my photos I’m sure I’ll be posting a few (or a lot) to my Facebook page!