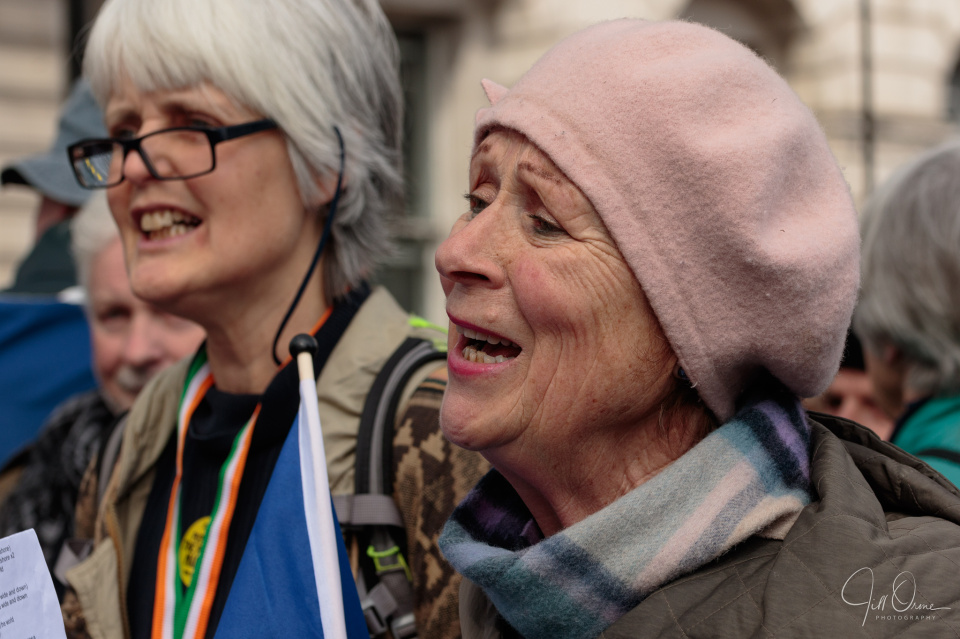 I could have brought you the massive Theresa’s Nose float; or the lovely Mike Galsworthy of Scientists for EU, or some of the Remainiacs, or Chris Addison, or one or two other well-known faces who were in our section of the Put it to the People march today – and when I get to all my processing tomorrow I’ll probably put a few images on Facebook, and link to them here. But for tonight I’m choosing this one, which sums up the spirit of the protest: these lovely ladies were part of a street choir which stood on Piccadilly, singing gently satirical songs unaccompanied and in harmony, lifting the spirits of the many thousands of people who were slowly and patiently shuffling past them with no prospect of reaching Parliament Square before the speeches ended.

The organisers are confident in saying that there were over a million people there, but it’s rumoured that the police (who no longer publicly release their own estimates) have unofficially told a couple of the organisations involved that the number was closer to two million. At one point the march was measured from the air as being two miles long, and certainly there seemed to R and me to be many more people around us than for the People’s Vote march last autumn. We were instructed by the stewards to begin walking much earlier than we’d expected – we hear because the police were seeing so many people arriving at the back of the march that they were concerned about a crush building up, and wanted the people further forward to begin making space – but progress was much slower: last time we didn’t get out of Park Lane until after 2pm, and made it to Parliament Square by about 4.45, but today we were under way by 12.30, and pulled out around 4.30pm (to grab something to eat before heading for our train home), without even having made it to Trafalgar Square.

But however many people were there, the important thing was to have been part of it. I’m not naïve enough to think that the Government is going to listen – certainly, from his responses to direct appeals, our own MP appears blithely unconcerned about the path down which he’s helping to steer us – but if you profoundly believe that something is wrong, you have to try to make your voice heard, and that’s what we did today. R and I want to be a part of this kind of Britain: good-humoured, inclusive, and outward-looking, rather than – well, you can see where I was heading with this, so I won’t labour the point. These ladies weren’t singing the Ode to Joy, but that’s what I’m hearing in my head right now.

If I have any sadness about not making it to the Parliament Square rally, it’s that I missed being part of this brilliant stunt by the excellent team at Led by Donkeys!