I went off to Tiddesley Wood near Pershore this morning in search of the Common Clubtail dragonfly, which is listed at that site. It’s a renownedly elusive beast, however, spending much of its relatively short life up in the tree canopy; so even though I walked the full length of the main ride, to the point at which the wood comes close to the River Avon, and then returned via various small cross paths that took me into the depths of the forest, I was neither surprised, nor more than mildly disappointed, not to spot one. The received wisdom is that your best chance of seeing a Common Clubtail is to catch it as it first emerges – which is fine if you know where that’s likely to happen; so I’ve now added to my “species to track down” list a human being who knows the habits of Worcestershire dragons well enough to tell me which stretches of the Avon the CC favours.

I was compensated for the dearth of Common Clubtails by spotting this handsome chap, which I could see from his shape was some kind of chaser, but which I couldn’t identify further. It turns out that he’s an immature male Scarce Chaser; in time his abdomen will develop the bluish, powdery surface known as pruinescence, and his eyes will turn blue. This species – which is a new one for me – used to be confined to a few rivers in East Anglia and the South of England, but in recent years it has been extending its range northwards and westwards, and if it’s not careful will soon come to be known as the Much Less Scarce Chaser Than It Used To Be.

On leaving Tiddesley I was magnetically drawn to Croome, a couple of miles down the road, where I did yet more walking (for which my legs are not thanking me), and discovered that the lake is now busy with Broad-bodied Chasers. For me these are the hardest dragonflies to capture in flight: they seem able to go from 0 to 60 in the blink of an eye, change direction on a sixpence, stop in mid-air with no apparent deceleration, hover for a split second, and then take off again at full tilt, usually in a completely unexpected direction. Nonetheless I tried, and did manage to get a few shots – though none well enough focused to be worth keeping. Instead, I’ve put in as an extra here a side view of one of the males taking a momentary breather on a reed – his abdomen showing the pruinescence I mentioned earlier in connection with the Scarce Chaser. 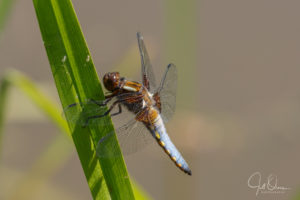 Finally, if you haven’t already been grossed out by it, I’ve put a few shots of the Croome heron making a kill onto my Facebook page.