I diligently went out just before moonrise this afternoon, yomped up to the top of the nearest hill, and shot the super-blue moon as it rose above the ridge on the opposite side of the valley. There was a layer of cloud and haze just above the horizon, so it took a few minutes to break through, and I was surprised at how squashed it appeared to begin with (due, I assume, to refraction) – but it was quite cool to see it looking so big and pink. I’ve added a photo from the sequence as an extra – this one taken seven minutes after moonrise, when the top of the moon was breaking free of he cloud, but the lower part was still within the murk, and looking rather flattened. 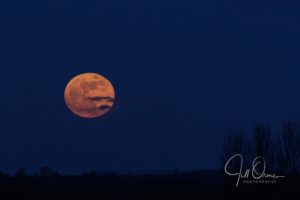 My favourite shot of the day though, is this swan: I was pleased with the focus, given that the silly creature wouldn’t keep still, and I love the way the BZ has rendered the late afternoon light on the river.