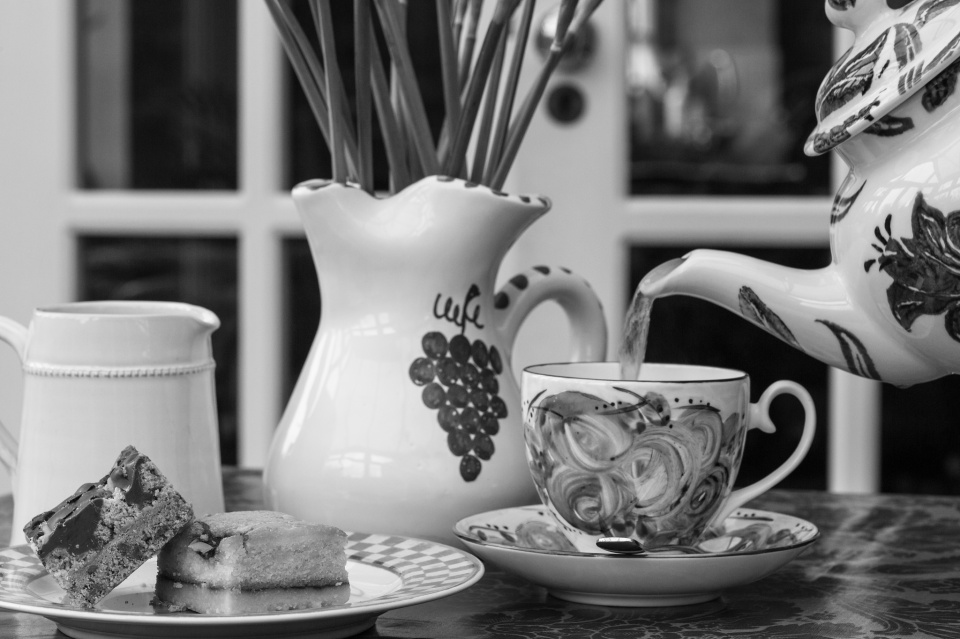 In my childhood a “fancy” meant a small fancy cake – not a sensible date loaf or seed cake such as one’s mother made on a weekly basis, but the kind which might turn up on the table at a special tea party, or on rare occasions might be bought in a cafe or a shop: a butterfly bun maybe, or a Cadbury’s chocolate roll. There was even a thing called a fondant fancy, which consisted of a cube of cake with a blob of sweetened creamy stuff on the top of it and the whole encased in violently coloured fondant icing – just thinking about it makes me slightly queasy.

In order to fulfil the brief for today’s Mono Monday I found it necessary to buy two fancies and have a little tea party, which shows huge devotion to my Art, I think you’ll agree. I have now drunk the tea (tepid and somewhat stewed), and eaten the chocolate biscuity thing; the almond slice is saved for R when he arrives home from work. Clearly these fancies fall into the category I was taught at college to refer to as Non-Essential Food: they do contain some nutrients, but your body can exist perfectly well without them, and would probably be better for doing just that. But I’m following the adage which was much loved by my grandparents’ generation: “A little of what you fancy does you good.”

On a more serious note, I was terribly shocked to turn on Breakfast News this morning and hear of David Bowie’s death, and he has been in my mind all day. As a teenager I wasn’t particularly into Bowie, though I did like The Jean Genie and Rebel Rebel – I was a weird child, heaven knows, but my strangeness was not of a kind to find validation or inspiration in the antics of Ziggy Stardust or Aladdin Sane. I clearly remember watching a major documentary about him in the mid-70s, and thinking that he seemed to be almost a victim of the persona he had created and the people by whom he was surrounded, and that it would be remarkable if he made it to 40. But by 40 he had kicked the substance abuse and gone through several personal and musical reinventions, revealing himself to be not just a survivor but a genuinely interesting musician. I was also rather charmed to hear today, among many other tributes, Jools Holland describing him as “a gentleman”: polite, generous, funny and good company. In many ways his entire public life was a self-crafted performance, and it seems as though his death was too, with the release of a valedictory album just two days ago, on his 69th birthday. I’ve bought the album but haven’t yet listened to it – today the track that has been going round my head like a looped soundtrack is Let’s Dance. RIP Mr Jones – a remarkable man and a truly unique artist.

The current total pledged at the Blipfuture crowdfunding page (not including Paypal donations) is £121,895.00 – which is 67.7%.