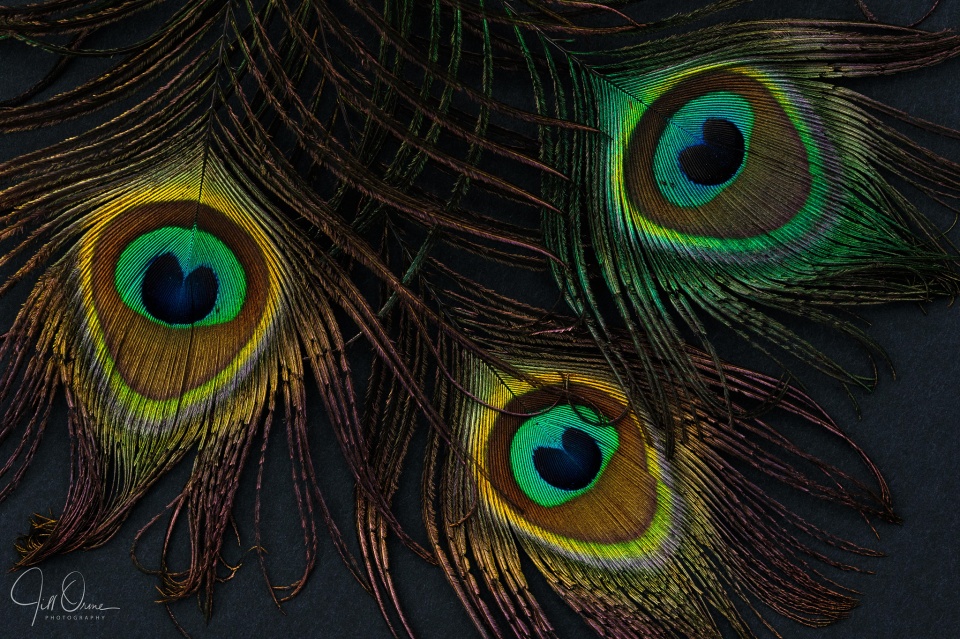 Another day of strong winds and intermittent driving rain kept me at home – having watched a blackbird literally clinging to the edge of a patio pot to avoid being blown over, I didn’t fancy my chances of piloting the MX-5 safely to anywhere interesting, or of finding any wildlife to photograph even if I was willing to brave the weather.

So I mooched around like a bored teenager, scowling at the festering “to-do” pile of paperwork on my desk, and achieving absolutely nothing useful. In the end, the need to take some kind of photo got me rummaging around for still life elements, and I remembered mentioning to R a few days ago that I wanted to try a high-key shot of some peacock feathers. Which I did, only to find that it really didn’t work: the colours just bleached out, and the result was flat and unappealing. So instead I went for low-key, and pushed the tone curve to bring out the jewel tones. R has chosen this image because he because he finds it more interesting than the shots of individual feathers; I wish now that I’d paid more attention when I dropped the three of them on the foam board, and arranged them with the greener one in the middle. But I do still quite like it.

Faffing with these feathers has made me slightly nostalgic for the days when we had peacocks in the village – though I’m not sure that many people would agree with me. They belonged to the farm down the road, but were allowed to roam freely, and I was told that they had favourite roofs, on which they used to sit early in the morning and call to each other. It is a pretty loud (and insistent) noise, but I always felt that the threatening use of the word “shotgun” by some of my neighbours was uncalled-for. Over time the group dwindled and disappeared – not, I think, from being shot, but due to arguments with cars, and possibly foxes. Once they were gone I was glad that I’d bothered to scoop up the handful of moulted tail feathers that I spotted on a verge one day, while I was out walking the dogs.