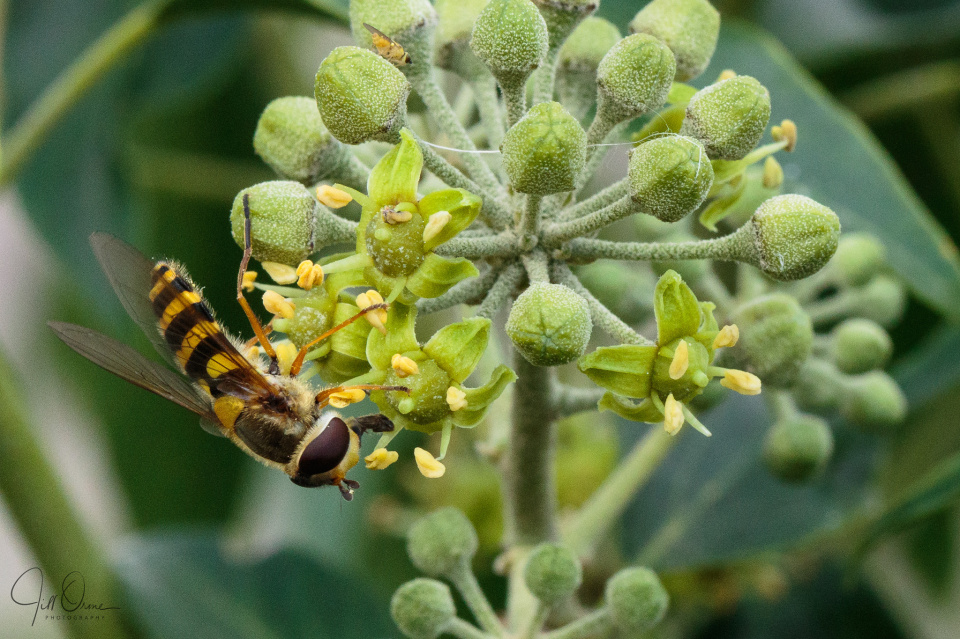 One of the poignant pleasures of the late summer and early autumn is the emergence of the ivy flowers, which act as a magnet to all the invertebrates in the area that feed on nectar or pollen. I’ve been seeing reports this week of ivy bees emerging around the country, and in the very narrow window of opportunity I had for a bug hunt this morning I went down to Tilly’s field to see if I could find any. They don’t seem to be out here yet, but there were plenty of other bees, flies, and wasps competing for the open flowers.

There’s something about ivy that seems to send insects frantic – it’s almost as if they’re on speed, and in quite poor light it was tricky getting well-focused shots as they zoomed about. I also had to keep a weather eye on a couple of wasps which took exception to me – maybe thinking that I was muscling in on their feast – and repeatedly flew at my head. I’m not generally scared of being stung, but I confess that having to shake a wasp out of my hair was a little unnerving!

This isn’t a wasp, of course. She’s a Syrphus ribesii hoverfly, and of all the visitors to this stand of ivy she was probably the least hysterical. Nonetheless, in every one of the photos I took of her, her wings were vibrating – you may be able to see that the left wing in this image has movement blur. Males of this species are known for vibrating their wings – Steven Falk refers to them as the Humming Syrphus – but this is the first time I’ve ever seen a female do this while feeding. I’ve no idea why she was quivering, but I’m fantasising that it was because the ivy is soooo delicious that she just couldn’t contain her excitement.