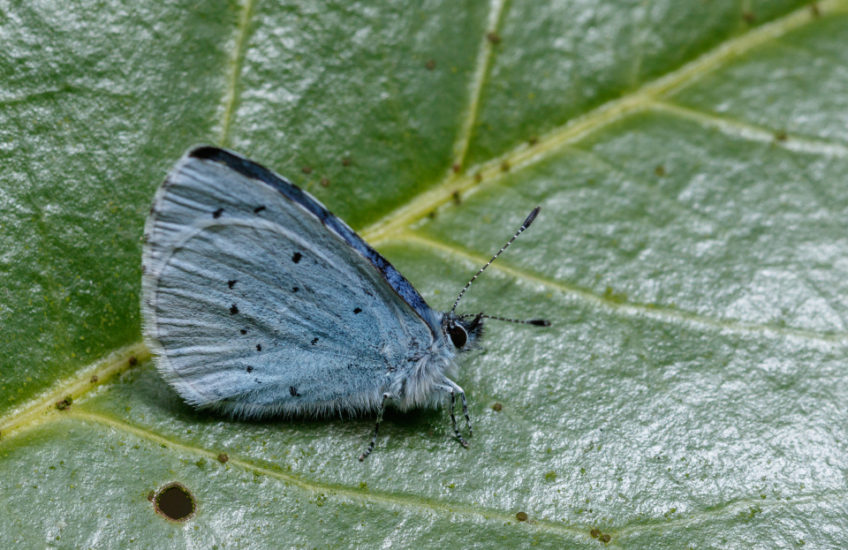 I’m soooooo far behind with everything, I just don’t know how I’m ever going to catch up with myself: desk covered with paper, requiring more or less urgent processing; garden going to hell; house an utter tip; multiple folders of un-edited photos nagging at me every time I look at the Mac…

That’ll teach me to go gadding off to Amsterdam, having fun. And it has – I spent an hour of what should have been working time this afternoon sorting out another city break. I would tell you where and when, but then I’d have to kill you to make sure you don’t come round and burgle the house while we’re away.

I did manage some gardening this morning – I edged the long front border, which has made that bit of garden look almost tended. But I didn’t get round to cleaning the windows. Or the top of the cooker. Or washing the car.

But more happily, when I did my bug walk I found this lovely fresh Holly Blue, sunning itself on a laurel leaf. They’re usually the earliest of the blue butterflies to appear – they’ve been around for two or three weeks now – but this is the first one I’ve seen that’s been still for long enough for me to get a decent photograph. It would have been nice if he’d chosen somewhere more photogenic to sit, but you can’t have everything. They’re small, by the way: the folded wing is not much larger than my thumb nail.

In other news, I see that the leaf cutters are back.