All she wanted to do was to get herself some lunch; but every time she stopped to eat she was besieged by a crowd of amorous males.* By this juncture she was getting quite fed up, and kept departing at such high speed that the males were left flying round and round the daphne in bemusement.

Where’d she go?? She was here just a minute ago! Hang on – I think she went that way…!

And off they would all zoom. A few seconds later she would reappear and start eating again, only to have the hangers-on track her down and begin pestering her again. When I caught her on her own and stuck a macro lens in her face, she was not impressed.

By the way, should you be thinking that the male here has his toes turned out in sexual anticipation, I must disappoint you: Anthophora plumipes always fly like this, and to me it’s one of their most endearing traits – I’ve put in an extra of a lone male flying towards my neighbour’s pieris bush in just the same attitude. I’m quite pleased with myself for managing to snap these little chaps on the wing, because they’re flipping fast; I put it down to having my eye in, after several months of trying to photograph birds in flight. 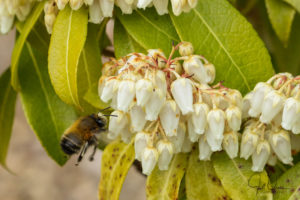 I had an even closer encounter than this today with a much smaller bee: a male tawny mining-bee, no more than about 8mm long, which was resting on one of our laurel hedges. He’s rather dapper, with a truly impressive jaw, and if you’re interested, I’ve posted him to Facebook. If you’re trying to track down solitary bees, I recommend finding a laurel hedge and checking it over (especially in sunny weather), because in my experience these little bees will often sit and bask on the large leaves during their down time.

* Insert your own joke here.