Now that I no longer have to mix it with the early morning traffic I generally avoid doing so, but every now and then I do get out and about early, reminding myself that this can be the best part of the day. This morning I was in Trench Wood by 8.30am, when the sun had just broken through after a misty start, and the air was fresh and the temperature still slightly crisp, and I had a thoroughly enjoyable walk around all of the rides before the place became uncomfortably hot. 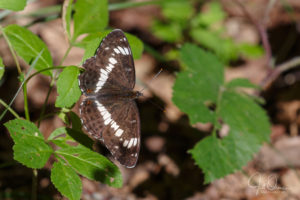 One of the first interesting things I saw was the White Admiral in my extra image, basking on low foliage in a patch of sunlight with its wings open, which is fairly unusual behaviour for this shade-loving species: I assume that it was still trying to warm up after last night’s chill. I then had close encounters with a couple of dragonflies: a rather shy Black-tailed Skimmer; and the female Southern Hawker in my main image, which was fresh in both senses of the word, being quite newly-emerged, and bold almost to the point of sassiness. Southern Hawkers are often described as inquisitive, and this one certainly seemed to be checking me out; she flew several circuits around me before settling right next to me, and allowed me to get so close in with the macro that I eventually realised I was now too close, and wasn’t getting all of her in the frame. By the way, the identifying features that say “Southern Hawker” are the cat mask mark at the top of her abdomen, and the fact that she has blue-green stripes, rather than spots, on the three distal abdominal segments.

As I was walking back along the main ride at the end of my visit, I had the pleasure of watching – for the second day in a row – the mating flight of a pair of Silver-washed Fritillaries. I’d previously only read about this, but it’s dramatic and quite unmistakeable: the female flies along – fast – in a straight line, and the male keeps pace with her, but flying even faster so that he can loop continuously over and under her, wafting his scent over her as they go. Yesterday’s pair at Whitecross Green Wood were flying about ten or twelve feet up in the air; despite the heat, I chased after them for a few yards, mentally calling out Wait for meeee, pleeease!! – only to see them disappear into the distance at high speed. Today’s amorous couple flew past me at shoulder height, giving me an even better view; older now, and wiser, I just stood and watched till they were out of sight. I’d love to see the part of the courtship where they land, and the male encourages the female to stroke her antennae across his sex brand – but as the BBC are not paying me to sit in a hide for several weeks at a carefully selected location, that will only happen if I’m lucky enough to be in the right place at the right time when a pair lands to consummate their relationship. I live in hope, rather than expectation.