When I realised that today’s post would mark the completion of four years of daily photos and public wittering, I toyed briefly with the notion of doing some kind of arty image with fork handles. But that kind of thing is wet-weather work as far as I’m concerned, and though last night we went through several hours of spectacular thunderstorms, today was sunny, warm, and humid – in other words, ideal bug conditions – so instead I wandered off around the village, looking for something with four wings.

If I were able, I’d probably have done a couple of back flips when I walked into the butterfly field: yesterday it didn’t provide a solitary butterfly, but today I hadn’t taken more than a dozen steps when a male Common Blue whizzed past me, hotly pursued by this Brown Argus, who was furiously defending what he’d decided was his territory. It was really quite funny – there were two male and one female Common Blue in the area, all of them noticeably bigger than the Brown Argus, but although he ignored the female, he would not allow either of the males to feed, or even sit down, in his patch. Every few seconds he would see one of them off, after which he’d return to this ribwort, land, and open his wings gracefully to bask….. only to have to go chasing off again almost immediately, when one or other of the male CBs came back to look for the female. Who, by the way, was having a very nice time, browsing the flowers, and not being bothered by either of the boys because the BA wouldn’t let them near.

All of which was very entertaining to watch, but because of all the zooming and fighting it took me about half an hour in quite punishing heat to get the photos I wanted. The BA was the easiest: once I’d spotted that he favoured this as his basking plant, I just had to wait nearby for him to come back to it, and then try to get my shots before he leapt into action again. The female CB was also relatively easy, because she was so busy browsing that she wasn’t worried about me creeping up on her. But I’d almost given up on getting a shot of either of the male Common Blues, when one of them sneaked in to feed on the BA’s patch of ribwort while he was off chasing the other, and I managed to snap the image I’ve added as an extra. 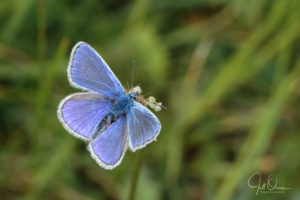 Finally, because twelve months ago I couldn’t tell them apart, and I know that other people sometimes confuse them, I’ve put a post on my Facebook page about the differences between a Brown Argus and a female Common Blue – if you’d care to take a look, and you spot any glaring bloopers, please do let me know!

So there we are: by the blipfoto measure at least, 4 years of blipping completed. I’ve learned so much over these four years that when I look back I’m embarrassed at how little I used to know about things that have now become a passion – photography for one, and the natural world for another. I’m hugely grateful to the people (some of whom I’ve met in person, and some who remain “virtual” friends) from whom I’ve learned, and from whose journals I draw inspiration – even though I’m shockingly bad these days at doing more than swooping in and dropping the odd star or heart, before grabbing the camera and rushing off out in search of another photo or five hundred of my own.

Thanks for all the amazing images, and the laughs, and the challenges, and the blipmeets. And the cake, of course!