They’re really quite big, aren’t they? Certainly I think the chap with the pushchair thought so, though to be fair, they were a lot closer to him than to me.

Dad and Junior apparently took this low-level flight along the river Avon this afternoon just for a change of scene; I really don’t know why they bothered flying four hundred metres, when they’re such strong swimmers, and taking off is such a huge performance. At one stage another male started to take off after them – simply because they’d annoyed him, it seemed – but before he was even properly airborne decided that it was all just a bit too much trouble and subsided back into the water.

A few minutes later we happened to be near to another youngster – presumably from the same family – when he also decided to move house. The extra shows him about half a dozen strides into his run along the water, but it took several more before he finally managed to get his feet and wings clear. 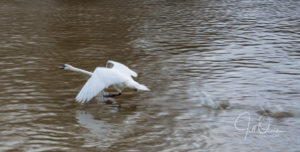