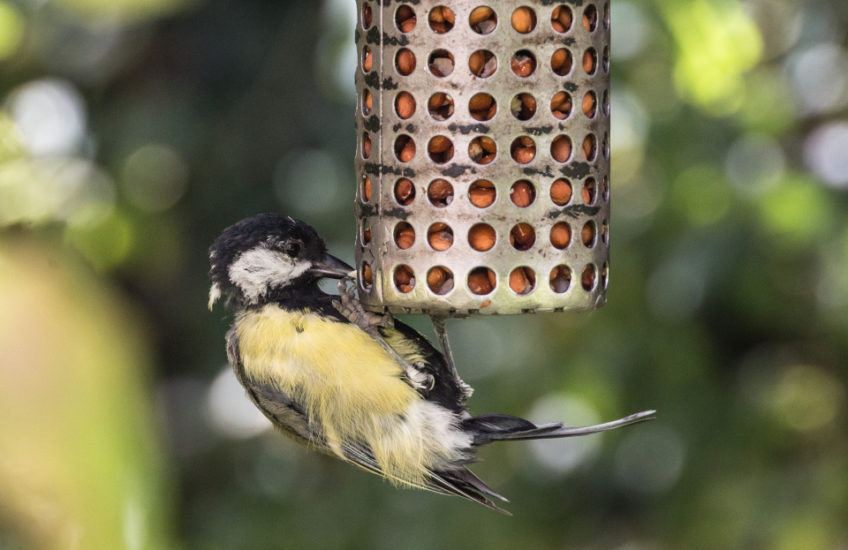 I completed my first ever tax return on line. I know. Yes, I really am as old as you think I am – but please don’t scoff.  The thing is that for years my tax affairs were so straightforward I didn’t have to do one at all; and then the accountant we have for the business did it for me. But this year I decided it was time to man up and do it myself. Took hours. I kept checking and rechecking everything, and adding and re-adding, and printing everything off so I could go through it again….  I was toadally zorsted by the end of it all.

So, eventually I got to a page that said “We think we owe you some money.” And I thought “Cool! That’s what I think too!” And then it said “Would you like us to show you how we did our calculation?” And I said “OK then – show me.”

It was like one of those things where you take away your age in years from the sum of the last England cricket score and the number of pounds in a ton, then divide by the number of days in a leap-year February and get 17. Almost nothing on the page seemed to bear any relation to what I thought I’d told them. So I had to go back to the beginning and check it all again……

Somewhere in the midst of the chaos and confusion, I took some time out to go on a little garden photo safari – and came back with 130 shots. It was one of those rare days when you keep seeing interesting things – several nice flowers, a couple of butterflies, a wasp which made me shudder even as I was photographing it, and a hoverfly I’d never seen before – and then, as I was making my way back to the house, a couple of juvenile birds bold enough to keep eating peanuts while I photographed them. I thought they were both great tits until I uploaded the shots, but then I realised that the smaller one was a completely different colour, and a little research made me almost certain that it was a coal tit.

I especially like this shot because the young great tit is holding one claw out in a way that reminds me of a refined lady, keeping her little finger raised as she drinks tea from a tiny, delicate cup. (So unlike my unrefined self, with my pint mug that almost requires both hands to lift it.) The first extra is the (supposed) coal tit; and the second shows them both together, with the coal tit staying a safe distance from the great tit – which rather forgot its company manners when it came to sharing food. 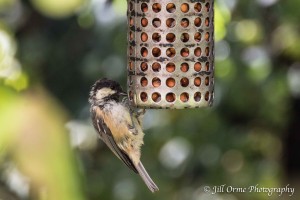 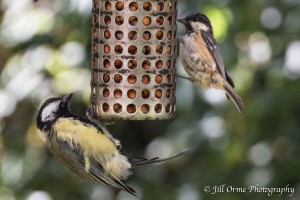