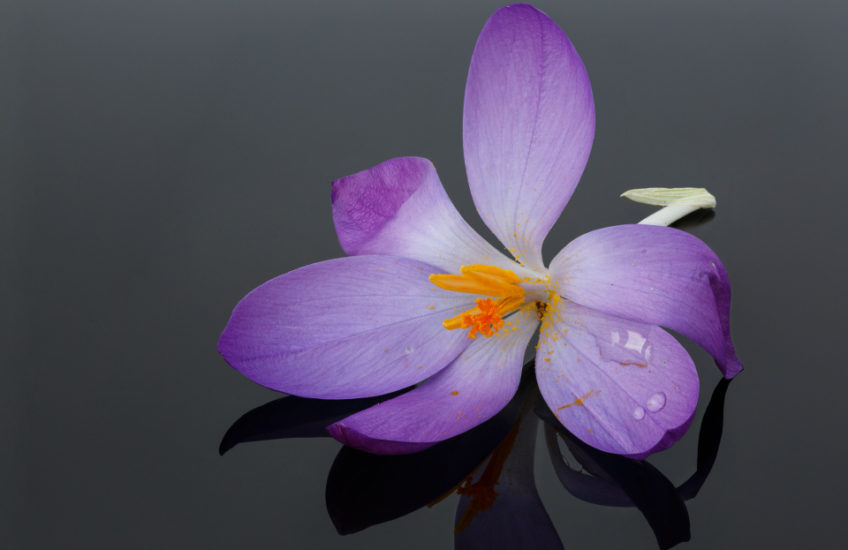 Despite having kept both R and myself awake most of last night with (if I say so myself) some Olympic-standard coughing, I think I must be feeling better: today I went full Bitter Old Crone at anyone and everything that had the misfortune to catch my less than forgiving eye. As you possibly noticed, if we’re acquainted Facebook-wise. I don’t know many actual humans on Twitter, which is probably a good thing.

In the end I thought I should give the world some peace from all the ranting, and as it had stopped raining I went out looking for a Tiny Tuesday crocus to photograph. Five dozen photos later I was incandescent, the crocuses were cowering, and the 5D and tripod were slowly subsiding into the mud – probably thinking that on balance it would be less painful to fall over before they got kicked. Luckily, before the Bitter Old Crone could go Terminator, I spotted this tiny bloom (flattened by wind and rain rather than by me), so I apologised to it, picked it, and took it inside to immortalise in a more controllable environment. This is a 10-shot focus stack; despite how badly I’ve been behaving I’d be grateful if you refrained from pointing out any glaring artefacts, because I’ve been working on it for hours. Thank you kindly.

Thank you kindly also for your continued support of this journal, which I’m told has now reached its kiloBlip – if you hadn’t all been so lovely I’d probably have got discouraged and gone away a long time ago, but as it is I’ve made some great friends (virtual and actual), done a lot of photography (and become a lot better at it), learned a ton of things I didn’t know before, expressed a great many opinions, and generally had a thoroughly good time. I remember saying to R back in 2014 that if I was going to do a 365 I should probably put it on line to make sure I didn’t cheat or give up, and that I’d heard about some Scottish site with a weird name through an article in the paper – and now here I am, with Blip an embedded part of my life, and a piece of paper in a file somewhere that says I own a share of it. Hooray for Blipfoto, hooray for all of you good blippers, continuing thanks to our Directors for all they do for us, and long may we all continue to be here.