Had I been on my own in Stratford this morning, rather than walking with R, I’d have stalked this pair of courting swans for much longer than I did, and with patience I might have captured the perfect necks heart shot. I might also have noticed that they were two stops overexposed, and done something about it, but let’s step around that: what’s a burned-out patch of feathers among friends?

More interestingly, late January seems very early for the determined smooching they were up to, but it really did feel like spring today – in fact, it was so warm in the brilliant sunshine that I cast a clout and left my coat in the car, and didn’t even slightly feel the lack of it. I expect it’ll be snowing again tomorrow.

The extra is another almost-but-not-quite, taken in the depths of Gloucestershire late this afternoon, when I was out looking for owls. You’ll have noticed, I daresay, that it’s not an owl. That’s because the owls were elsewhere – apparently I should have been there yesterday, when there were definitely owls (Owls yesterday, I found myself thinking, and owls tomorrow, but never owls today). Anyway, I had an informative chat about owls with some other fans, and a bit of a walk in the gloaming, and I was entertained by this kestrel, which spent most of the time I was there hunting above the owl field. I have better-focused shots of it, but I like this panning one better, because of the context given to it by the wall. 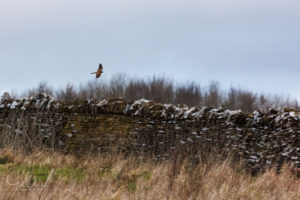