As R and I set off to walk back from the centre of Stratford to Old Town along the south side of the river, I said (as I generally do) something along the lines of “OK guys – time for one of you to kick off.” For most of the walk it seemed as though I was going to be disappointed: the river was bizarrely quiet again, and the birds that were around were mostly floating about peacefully, doing nothing photogenic. We’d almost reached Stratford Lock when I spotted this swan (which unusually I think is a pen rather than a cob), working itself up into an incandescent lather about the presence of a group of juveniles in its territory. The extra shows what happened next – as you can see, the teenager knew that it was in trouble, and a couple of seconds later all of the youngsters lost their nerve and took off. The aggressor immediately calmed down and went back to doing nothing very much, apparently content with a job well done. 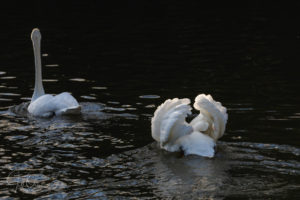 In other news, I was sad today when my mental furniture had to be rearranged yet again, on hearing of the death of the actor Peter Wyngarde; but I was amused that various contradictory statements about him on Twitter caused me to look up his Wikipedia entry, and discover that in these days when almost everything there is to know about almost everyone seems to be in the public domain, Wyngarde managed to obfuscate his origins to the point at which it’s still not really clear who he was. His death was also the trigger for R and me to have one of those kind of conversations:

And so on. I like to be able to produce at least a couple of correct pieces of information in conversations like this (beyond “She was in that thing, you know – the comedy thing – with the bloke who was the teacher in the film we saw about a year ago, with what’s-her-face from the police series set in Halifax. Or Dorset. Or was that that other woman….?”), just to prove that I haven’t yet totally lost my marbles. However, I largely failed today, and had to resort to the web for most of the following:

* The other guy in Department S was Joel Fabiani;
** The bloke in The Champions who was a bit like Joel Fabiani (i.e. tall, dark, American) was Stuart Damon; the British male interest in this was William Gaunt, and it was indeed also graced by the stunning Alexandra Bastedo;
*** The thing with Roger Moore and Tony Curtis was The Persuaders (I did actually manage to remember this one. Eventually.);
**** The woman in Department S was Rosemary Nicols.

Having started down this mental track, I now find myself quite unnecessarily trying to remember who was in Mission Impossible (the proper television one, not the Tom Cruise films); I’ve got as far as Peter Graves, Leonard Nimoy, Martin Landau, and the strongman bloke with no neck… and now I’m stuck. I think I’d better turn off the computer and go to bed, before I start trawling IMDB again…..