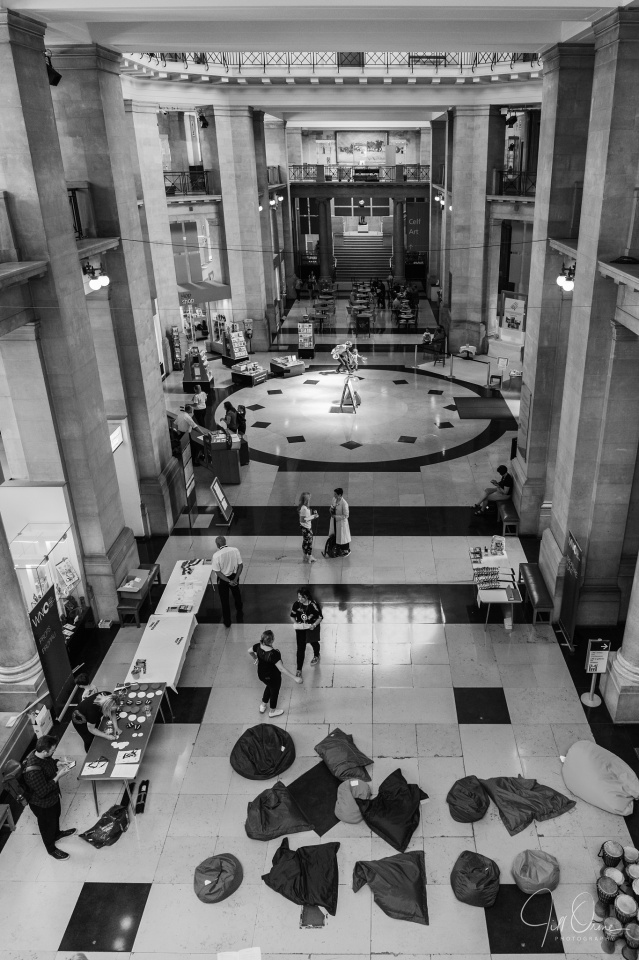 R and I went to Cardiff today, to take L and G out for lunch and, as a bonus, to see Women in Focus, Part One at the National Museum of Wales. This is a really nice photographic exhibition, should you be in the area; as well as work by the kind of people you’d expect, such as Eve Arnold and Diane Arbus, I was very pleased to see two prints by Tish Murtha, which were part of the archive recently donated to the Museum by David Hurn (Murtha having been one of the photographers who was taught by David Hurn at Newport), and some very good work by people of whom I hadn’t previously been aware, such as Clementine Schneidermann.

I quite wish that I’d kept the long zoom on the camera this morning, rather than changing it for the 24-70 walkabout lens. If I had, I’d have been able to bring you a close-up shot of the scene a third of the way down this frame, which culminated in Small Child having to be picked up, tucked under the woman’s arm and removed; and I’d also have been able to do a better job on the dragonflies that were patrolling the pond at Gloucester Services, where we stopped for coffee on the way back up the motorway.

Let’s leave aside the small annoyance of having the wrong lens, though: a day containing L and G, Italian food, a good exhibition in a nice museum, and coffee with dragonflies, has to go down as a Good Day. Oh – and I bought a nice ceramic jug as well – which makes it an even Better Day.