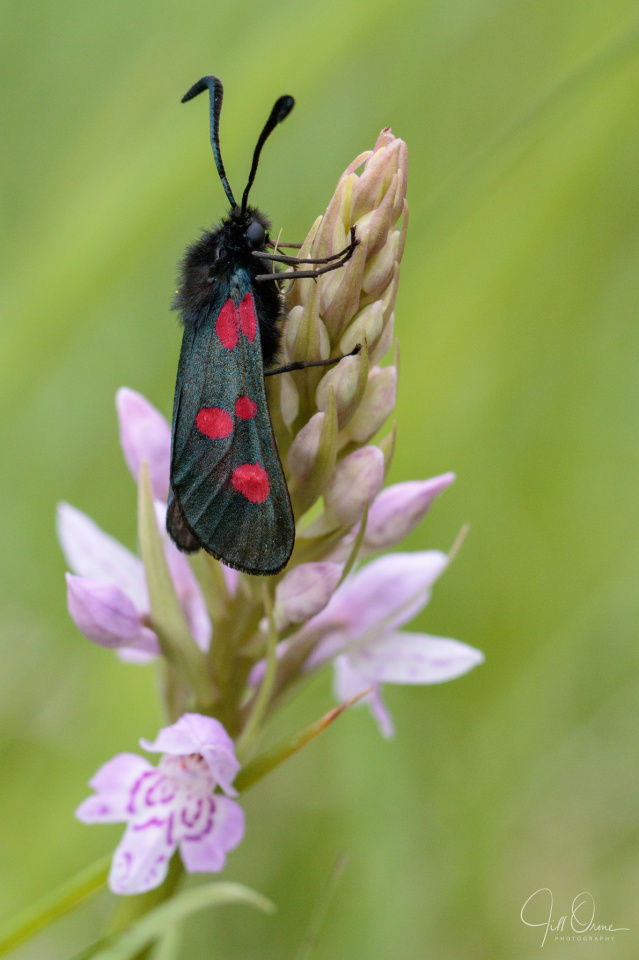 I love almost everything about this moth, from its gorgeous spotty wings, through its extravagant antennae, to its insouciantly curled proboscis. I love the way it’s posing on this orchid, and the fact that it looks as though it’s dressed to go out for the evening, in a shimmering cloak with a fur collar.

What I don’t love is the fact that I’m not 100% certain what it is. I want to say that it’s a Five-spot Burnet, because there appear to be five spots on its forewing. But according to my book, and UK Moths, Five-spot Burnets don’t fly until July – though Butterfly Conservation has them flying from May to August. I’ve squinted at it every which way though, and I can’t make it look like either a Six-spot or a Narrow-bordered Five-spot Burnet… so I think I’ll just have to record it as Zygaena trifolii, and see what the verifier thinks.

I have to say that when I arrived home from Prestbury Hill this afternoon with nearly 500 photos in the camera, I didn’t think that I’d wind up spending more time trying to firmly identify this chap than I would sorting, culling and processing my files. There were so many invertebrates out and about at the reserve that I hardly knew which way to turn, and I’ve been spoiled for choice as to what to post; so I could have stepped around the moth identification issue by blipping a butterfly or a beetle – or even some two-beetle bug porn. But I loved this scene even as I was photographing it, and although I’m pleased with some of my other shots, this one is my favourite of the day.

If you’d like to see some of the other things I spotted today, I’ve posted a selection here.