What do you mean, that’s in the eye of the beholder? He’s a Beautiful Demoiselle, and that’s all there is to it.

Thanks to the lovely Hillyblips trusting me with the location of her Special Secret Site of Photographic Interest (SSSPI), I was able to go looking today for a species I’d never seen in the flesh before. If you compare him with a male Banded Demoiselle the difference between them is quite obvious, but it’s much less so in the females, which have very similar colouring to their cousins. It seemed to me that the Beautiful female is slightly larger than the Banded – though my book doesn’t agree – so given that I found both species at this site, my only real confirmation that the female in the extra is indeed a Beautiful Demoiselle is that her pterostigma, or wing spot, is further along the edge of the wing towards her body than it would be if she were Banded. 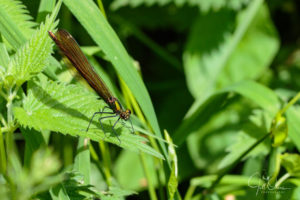 Having squelched through a field that is frankly a swamp after the recent storms, and then nettled myself fairly severely getting within macro distance of these lovelies, I returned to the roadside verge where we’d parked the car, beaming in triumph. “Found some!” I said to R, who was leaning on the parapet of a small bridge, looking down into the stream below. “Yes, I know,” he replied, gesturing to the half dozen who were dancing in the dappled light above the water, and coming to rest on the bramble leaves overhanging the stream.

This is a better shot than I’d have got from the bridge though. Definitely worth the nettles…