I’d been planning a road trip for today, but my back, which has been iffy for a while, went decisively out yesterday, and this morning I could hardly stand up. Literally. My Dad, bless him, used to walk like Baloo the bear – leaning slightly forward with bum stuck out – and as a child I walked the same way, until my mother’s robustly expressed opinion on the matter prompted me to develop decent posture as a defence mechanism. Today though, I found myself not only leaning forward at about 20° from the vertical, but also listing strongly to port – a combination which could easily have left me tottering round in a small circle all day, but for some heavy elastic strapping, which has saved my bacon on a number of previous occasions and came to the rescue again today.

Once I’d lashed myself together with elastic and velcro I was able to make it downstairs for tea and toast, but gazing out of the window at the MX-5 I realised that the road trip was not going to happen: I could doubtless have got into the car by means of a controlled fall, but getting out of it again would probably have required a hoist. This, as you can imagine, made me quite grumpy – but at least, I thought, looking at the sunny garden, it was a good day for doing macro. A couple of hours later I opened the back door, stepped out onto the patio, and was almost lifted off my feet by the wind. So perhaps not such a good day for macro after all….

Nevertheless, as they say, she persisted – crossly and quite carefully at first, but then with increasing enjoyment as I began to find interesting things in different corners of the garden. I wound up with a lot of record shots, which I’ve spent most of the evening checking with the People Who Know before listing them on iRecord, and some of them are first records for me, which is always satisfying.

Neither of the two hoverflies I’m posting this evening is a rarity or a first find, but given the way the foliage was blowing around I’m really pleased with both photos technically. The main shot is a male Syrphus, about 1cm long; and the extra is a female Melanostoma scalare which is about 8mm in length. Please do take a look at them both full-screen, if you have the time. 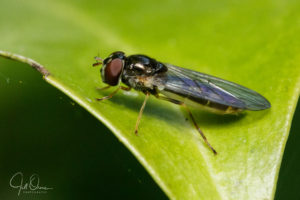